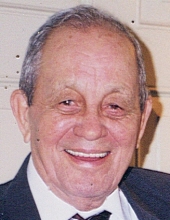 Americo Pagán, 96, of Syracuse, passed away peacefully on Wednesday, January 11, 2017 to be reunited with the love of his life, Milagros. Born in San Germán, Puerto Rico, he was the son of Monserrate (Graciani) Murphy and Don Pedro Pagán Sepúiveda.

Americo was a devoted and loving husband, father and grandfather with an immense love for his country and family. His priority was always family's well-being. Americo was a decorated 23 year veteran of the United States Army, having the unique distinction of serving in World War II, Korean War and Vietnam War. His initial years were stationed at Fort Allen, Puerto Rico and ended with the Army Intelligence in Syracuse. A man of many jobs, he was always driven to succeed and provide for his family. Upon retirement from the military service, he went on to work 20 years at the Mattydale United States Post Office. His endearing personality led to many friendships, lasting impressions and wonderful memories.

A big believer in education, Americo achieved his lifelong dream of earning a college degree from Onondaga Community College at the age of 80. A humble man of simple ways, he always looked to provide a better life for his family. The family get-togethers were filled with laughter, gifts and plenty of food for all, where he was known for his "eat more" comments. A man of faith, Americo was a communicant at St. Anthony of Padua Church. He had a big heart, which he demonstrated with charitable giving throughout his life. Americo cherished family time, especially picnics at Green Lakes and watching the Yankees.

Relatives and friends may call Sunday, January 15 from 1 to 4 p.m. at the Buranich Funeral Home, 5431 W. Genesee St., Camillus.

A funeral Mass will be celebrated Monday, January 16 at 10 a.m. in Holy Family Church, 127 Chapel Dr., Syracuse. Americo will be laid to rest in Onondaga Valley Cemetery.

In lieu of flowers, contributions may be made to the Community Living Center of the VA Medical Center Eighth Floor, c/o Kelly Sheldon, 800 Irving Ave., Syracuse, NY 13210.

Share condolences at www.BuranichFH.com
To order memorial trees or send flowers to the family in memory of Americo Pagan, please visit our flower store.