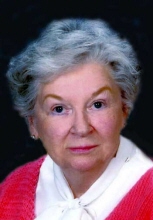 Ann Reussow Pierce, of Camillus, passed away Tuesday, January 24, 2012 at Syracuse Home Association. Born in Plymouth, Pennsylvania, she was the daughter of Harry Schadle and Charlotte Bird Schadle. She lived in North Syracuse for 17 years before moving to Camillus in 1971. She graduated from Hanover Township High School in Lee Park, Pennsylvania, and attended Syracuse University. Ann was employed by the Addis Co. for seven years, retiring in 1952 and was also formerly employed by the Rome Army Air Depot. She was a member of St. Luke’s Episcopal Church in Camillus and former member of St. Thomas Episcopal Church in North Syracuse. Ann was also a member of the Carriage House, Corinthian Club and Syracuse Stage. She was a life member of the Order of the Eastern Star, Chapter 185, and former president of Women of Rotary, North Syracuse. Ann was predeceased by her first husband, William Reussow, in 1967; second husband, Neil Pierce, in 2004 and daughter-in-law, Carole Reussow, in 2010. Surviving are her son and daughter-in-law, David and Pam Reussow of Walworth; stepson, W. Dennis Reussow of Orlando, Florida; six grandchildren and seven great-grandchildren. A memorial service will be at 10 a.m. Friday, February 3 at St. Luke’s Episcopal Church with The Very Rev. Craig R. Swan officiating. There will be no calling hours. Burial will be at the convenience of the family at North Syracuse Cemetery. Arrangements are by the Buranich Funeral Home, Camillus. Contributions may be made in Ann’s name to Hospice of Central New York, 990 Seventh North St., Liverpool, NY 13088; St. Luke's Episcopal Church, P.O. Box 91, Camillus, NY 13031; National Kidney Foundation of CNY, 731 James St., Suite 200, Syracuse, NY 13203; or to the American Heart Assn., P.O. Box 417005, Boston, MA 02241.
To order memorial trees or send flowers to the family in memory of Ann G. Pierce, please visit our flower store.