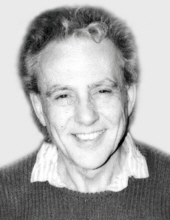 Arthur Evans Tashko LeGacy, Professor Emeritus of History at Syracuse University, passed away peacefully from cancer on November 3. Born in Boston on June 1, 1933 to the actress, Elsa Evans Sanvito and the painter, Artur Tashko, Arthur grew up as part of the family of Norman and Genevieve LeGacy of Brookline, MA. Arthur was the nephew of the Albanian soprano, Tefta Tashko and the grandson of the physician, Albert Evans. Arthur attended Brookline schools where he played baseball with Michael Dukakis, who became a lifelong friend. During his senior year, he had the opportunity to try out for his beloved Boston Red Sox and pitched at Fenway Park. After graduating from Brookline High School, he enlisted in the Air Force and, as an airborne radio operator, flew missions in support of the U.S. troops in Korea. Arthur received his B.A., M.A., and Ph.D from the University of Chicago. In Chicago, he worked in advertising, lectured at Roosevelt Univ. and served as an editor at Grove Press and as fiction editor of the Chicago Review. Dr. LeGacy joined the faculty at Syracuse University’s Maxwell School in 1965, where he was part of the Metropolitan Studies Program. Later, he was also a professor in SU’s College of Visual and Performing Arts. He taught undergraduate and graduate classes for 29 years, with a focus on urban history and film. He loved teaching and had a large and loyal student following. “A laboratory for inciting intellectual riot” was how he characterized his classroom approach. Dr. LeGacy’s writing included an extensive study of Frank Lloyd Wright’s contribution to architecture. Before becoming ill with cancer, he completed a book-length manuscript on how the demise of the streetcar changed America’s cities. He was a member of the American Historical Assn., Organization of American Historians, and the Urban History Assn. Influenced by the educational philosophy of the Scottish reformer A.S. Neill, Arthur founded the Children’s School in 1968. It was the first alternative school in Syracuse for elementary school students. He was also a founding trustee of the Landmark Theatre. Arthur is survived by his wife, Maria (Smaha) LeGacy; his children whom he adored, Juliet LeGacy and Theodore LeGacy; beloved granddaughter, Blossom VanSlyke; cousin, Dr. Eno Koco of England; his Tasko cousins, Artan, Silva, Frederik, Eva and Tefta of Albania; and his many friends. Arthur loved learning, writing, cities, film, jazz, sports (especially baseball), running, good conversation, fine restaurants and talking with Maria, his “love supreme.” He had a capacious spirit, a love of truth and justice, a kind and decent heart, a delightful sense of humor, and a determination to live on his own terms. A memorial service will be held on Friday, April 29 at 4 p.m. in Syracuse University’s Hendricks Chapel. Friends may call Friday preceding the service from 3 to 4 p.m. at Hendricks Chapel. Private burial will be in St. John the Baptist Ukrainian Catholic Cemetery at a later date.
To order memorial trees or send flowers to the family in memory of Arthur Evans Tashko LeGacy, please visit our flower store.