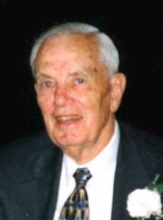 Arthur R. Gale Jr., 86, of Camillus, passed away peacefully on Tuesday, January 17, 2012 after a brief illness. Born and raised in Nashua, New Hampshire, he was the son of Arthur Rheuben Gale and Maude Richardson Gale. He was one of twelve children. He enlisted in the Marines at the age of seventeen. Stationed at Midway for a time during World War II, he worked in intelligence. Upon completion of his military service, Art moved to Rhode Island where he graduated from Bryant College via the GI bill. It was there that he met the love of his life and wife of 62 years. Art worked for Tupperware in Rhode Island and was transferred to a sister company, Syroco, in Syracuse in 1966. There he served as comptroller for many years before being promoted to vice president of finance and eventually chief financial officer, retiring in 1984. During his retirement years, Art spent much of his time enjoying his grandchildren, playing golf and spending summers in Lincoln, New Hampshire. The family would like to express their special thanks to the full line of staff at James Square, B South Rehab Unit. Your excellent care, compassion and guidance were truly appreciated. Art was predeceased by his parents, and nine brothers and sisters. Surviving are his beloved wife of 62 years, the former Patricia McGarry; son, Jon Gale of Cicero; daughters and sons-in-law, Ann and Bill Tillman of Baldwinsville, Patty and Dave Bushnell of Syracuse, and Chris Mersfelder of Camillus; sister, Gertrude of Florida; brother, Galen of Massachusetts; 14 grandchildren; two great-grandchildren; and several nieces, nephews and cousins. There will be no calling hours. A funeral Mass will be celebrated at 10 a.m. Saturday, January 21 at St. Joseph's Church in Camillus. Arthur will be laid to rest in the spring at the Onondaga County Veterans Memorial Cemetery. Arrangements are by the Buranich Funeral Home, Camillus. In lieu of flowers, contributions may be made to St. Joseph's Church "Faith In Action" Campaign, 5600 W. Genesee St., Camillus, NY 13031 or to Salvation Army, P.O. Box 6229, Syracuse, NY 13217.
To order memorial trees or send flowers to the family in memory of Arthur R. Gale Jr., please visit our flower store.