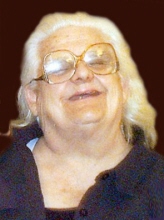 Barbara J. Ingram, 76, of Syracuse, passed away Friday, May 8, 2009 at St. Joseph’s Hospital Health Center. Born in Syracuse on Wednesday, June 29, 1932, she was the daughter of Charles Edward Kemp and Dorothy Poorman Kemp. A lifetime resident of Syracuse, she was employed by the Syracuse City School District for 20 years. Barbara enjoyed cats, loved her family and took pride in her grandchildren. She was predeceased by her husband, John Ingram Sr. (January 1, 1972), daughter, Patricia Kazimer, and brothers, George and Gordon Kemp. Surviving are her sons, John (Kathleen) Ingram Jr. of Warners and Paul (Debbie Austin) Ingram of Syracuse; sister, Maude DiBello of Texas; brother, Charles Kemp of Central Square and several grandchildren, nieces, nephews and cousins. Services will be at 7 p.m. Monday, May 11, 2009 at the Buranich Funeral Home, 5431 W. Genesee St., Camillus. Relatives and friends may call preceding the service from 4 to 7 p.m. at the funeral home. Barbara will be laid to rest at 1 p.m. on Friday, May 15, 2009 at Assumption Cemetery.
To order memorial trees or send flowers to the family in memory of Barbara J. Ingram, please visit our flower store.