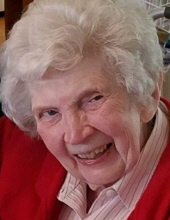 Barbara Louise Wachob, 90, of Camillus, passed away Tuesday, December 29, 2020 at Upstate University Hospital Community Campus. Barbara Wachob was a woman that embodied the people of the greatest generation. Being born at the start of the depression had a lasting impact on her life. Simple pleasures were usually preferred over material goods. She did not come from any measure of wealth, as was common during the Depression. Her father wasn’t as much driven to build a career as he was to just enjoy life, and she loved how his imagination could turn anything into fun. Her mother was a dependable and common sense bread earner, and gave Barbara her sense that a woman could both work and be the anchor of the household.

Though an only child, Barbara had the fortune of growing up near a cousin (Jackie), who would remain a lifelong friend and confidant. In her youth, Barbara enjoyed school and learning a great deal and graduated valedictorian of her high school class. After graduating, she took a gap year in a local business before deciding on attending Syracuse University. There she earned a baccalaureate followed by a Master’s degree in Education. After college, she returned to North Syracuse to teach as an elementary school teacher.

A few years into her career her father introduced her to the man of her dreams, a gentleman he worked with at Crucible Steel, Ray Wachob. He was a tall drink of water who like Barbara had a humble presence about him. Within a year they were married and began their lives together in a small home in Liverpool. There they attended a local church where they met a set of lifelong friends who enjoyed hosting dinners and playing bridge together. After a few years, they would contribute to the baby boomer generation raising three wonderful children: Bill, Sandy and Laurie. She saw the importance of a stable home life for her children and decided to switch careers to full time homemaker, at which she thrived, often bringing her sparks of imagination as a teacher to the mothering of her children, and their friends on Wolf Hollow Rd.

Barbara had a rare combination of an impeccable memory and a meandering train of thought, where she would veer conversations from one topic to another in a seamless transition. She had a truly inquisitive mind as well. She would start a conversation on a wide range of topics, and you were certain to get many more questions about your life and your opinions than you could ask of her. But you were never at a loss to hear her unique take on whatever topic crossed her mind. And you were often treated to a quip from Barbara that might not have been intended as such, but would leave you howling with laughter, sometimes to the point of tears. Yet Barbara was also the first to recognize and be concerned for those in her life that were at vulnerable points in theirs. It was a quality that would attract lifelong friendships, and maintain a closeness with her family near and far.

Later in life, with the duties of childrearing in the rear view mirror, among the biggest sources of pride in her life were her four grandchildren: Marty, Mike, Olivia and Owen. No birthday party or holiday was complete without surrounding herself with their presence. And no spur of the moment call of desperation to baby sit went unfulfilled. She especially loved playing board games with them and anyone else in her sights whenever possible.

Among her most requested ways to satisfy her family’s hunger was her Lasagna, her Mashed Potato Mold, and her Macaroni and Cheese.

Eager to prove that one is never too old to excel in life she became a talented, prize winning artist creating many drawings and watercolors that are proudly displayed in her family’s homes.

She also found interest in the unsavory life of politics, where she was never shy about letting politicians or C-SPAN know what she thought about the topic of the day.

And she loved Christmas. In fact the only thing that lit up at Christmas time more than the tree was Barbara. She created mythical elf villages to enchant her children and their friends.

We miss you Barbara/Mom/Grandma, and we know you are watching over us with love and car

Barbara was predeceased by her parents, Gerald and Sylvia Rhines.

Private services for family will follow at noon. To attend the live streamed service, please visit www.BuranichFH.com, click on Barbara’s obituary and then click on the Tribute Wall. Barbara will be laid to rest in Woodlawn Cemetery, Syracuse.

In lieu of flowers, contributions may be made to Robinson Memorial Presbyterian Church, 126 South Terry Rd., Syracuse, NY 13219 or to one’s favorite charity.
To order memorial trees or send flowers to the family in memory of Barbara Louise Wachob, please visit our flower store.