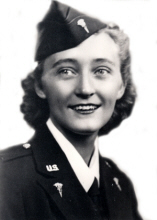 Bertha M. Hatcher, 92, formerly of Westvale, passed away Saturday, June 5, 2010 at Presbyterian Home, New Hartford. Born on Sunday, June 17, 1917, she was the daughter of Raymond Eugene Miller and Dorothea Christiana Matis Miller. Bert was raised in Drifton, Pennsylvania and graduated from Hazle Township High School and Montgomery School of Nursing. She lived in Syracuse until moving to Clayville in 2006 and was a registered nurse at Van Duyn Home & Hospital for many years. Bert was a first lieutenant in the Army Nurse Corps during World War II, serving in the European Theatre and in field hospitals following Allied front lines from the Normandy Invasion to the Ardennes Offensive (Battle of the Bulge). Bert volunteered at the American Red Cross Bloodmobile and the Rescue Mission and was a member of West Genesee United Methodist Church and Women in Military Service of America. Bert was predeceased by her husband, Marion "Mike" Hatcher, who died in 2006, and daughter, Mary Lee Hatcher, who died in 1969. Surviving are her daughters and sons-in-law, Joan Hatcher and Duane Patocka of Clayville, Carol Hatcher and Peter Jacobs of St. Paul, Minnesota and Nancy and Luis Luna of New Hartford; grandchildren, Miguel and Jesse Luna and Joseph and Katherine Jacobs; sister, Dorothea Magley of Canandaigua and several nieces and nephews. Relatives and friends may call Friday, June 18 from noon to 2 p.m. at the Buranich Funeral Home, 5431 W. Genesee St., Camillus. Services will follow at 2 p.m. Friday at the funeral home. Bert will be laid to rest in Greenlawn Cemetery, Warners. Contributions may be made to American Red Cross, Onondaga-Oswego Chapter, 220 Herald Pl., Syracuse, NY 13202.
To order memorial trees or send flowers to the family in memory of Bertha A. Hatcher, please visit our flower store.