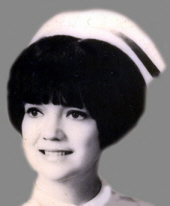 Bonita L. Brown, 60, of Camillus, passed away Tuesday, April 6, 2010 at Community General Hospital. Born in Syracuse on Wednesday, April 27, 1949, she lived in Camillus for 32 years. Bonita was a graduate of Solvay High School and Crouse School of Nursing. She retired in 1987 after 17 years with Crouse Hospital. She was devoted to her family and enjoyed spending time with them, especially her grandchildren. Bonita was predeceased by her father, Charles Campbell in 1999. Surviving are her husband of 31 years, Michael; son and daughter-in-law, Damian and Lisa Campbell of Liverpool; her mother, Helen Campbell; sister and brother-in-law, Andrea and Victor Brzezinski; brother, Kerry Campbell and nephew, Chad Brzezinski, all of Solvay; grandchildren, Collin and Addison; and step grandchildren, Austin and Alivia. Services will be at 11 a.m. Friday, April 9 at Buranich Funeral Home, 5431 W. Genesee St., Camillus with Rev. Allan Covington of Northside Baptist Church officiating. There will be no calling hours. Bonita will be laid to rest in Onondaga County Veterans Memorial Cemetery. Contributions may be made in Bonita’s name to one's favorite charity.
To order memorial trees or send flowers to the family in memory of Bonita L. Brown, please visit our flower store.