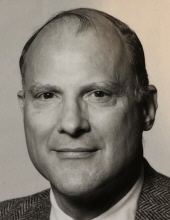 Carl S. Monz, 87, of Camillus, passed away Thursday, March 1, 2018 after a long illness. Born in Schenectady, he lived in Ilion before moving to Camillus in 1965. He graduated from Ilion High School in 1948 and Union College in 1953 with a degree in electrical engineering and also did graduate work at SU. Carl retired in 1992 after 40 years of service with GE. A longtime communicant of St. Joseph's Church, he served as a pastoral minister, Eucharistic minister, lector, usher and money counter. He was a member of Lockheed Martin Employees Assn. and the Elfun Society of GE, serving on many executive committees. Carl volunteered at Community General Hospital, American Red Cross Apheresis and the Old News Boys. He was an avid golfer. Carl was a great supporter of the Syracuse Symphony Orchestra and the West Genesee Wildcat Marching Band. Above all, he was a great husband, father and grandfather.

Carl was predeceased by his infant son, Paul; and parents, Carl and Gertrude Monz.

Relatives and friends may call Monday, March 5 from 4 to 7 p.m. at the Buranich Funeral Home, 5431 W. Genesee St., Camillus.

A Mass of Christian Burial will be celebrated Tuesday, March 6 at 10:30 a.m. at St. Joseph’s Church, 5600 West Genesee St., Camillus. Carl will be laid to rest in Greenlawn Cemetery, Warners.

In lieu of flowers, contributions may be made to the Wounded Warriors Project, 4899 Belfort Rd., Suite 300, Jacksonville, FL 32256 or Francis House, 108 Michaels Ave., Syracuse, NY 13208 or to the Wanderers’ Rest Humane Assoc., Inc., 7138 Sutherland Dr., Canastota, NY 13032.
To order memorial trees or send flowers to the family in memory of Carl S. Monz, please visit our flower store.