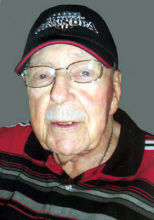 David J. Wykle, 94, of Camillus, passed away peacefully Tuesday, July 27, 2010 at home. Born in Lyons on Saturday, April 8, 1916, he was the son of Leslie Wykle and Margaret Meyers Wykle. He was raised in Lyons and moved to Camillus in 1945. Dave graduated from Lyons Union School, Syracuse University and Cornell University. He retired after 40 years from Conrail and New York Central Railroad. Dave served as a mediator for conductors and trainmen in New York, New Jersey and Northern Pennsylvania. He was a communicant of St. Joseph's Church. A lifetime member of the Elks Club in Lyons, he was also a former chairman of the Camillus Planning Board and former vice-chairman of the Camillus Democratic Party. He was an elected chairman of the local Grievance Committee and legislative representative of local 1007 UTU and the local Syracuse ACLU. Dave was predeceased by his first wife, Margaret; and son, Robert Alling. Surviving are his wife, the former Kathleen Bertrand; daughter and son-in-law, Jennifer and Brent Castaldo of Memphis; and grandchildren, Makayla, Braden and Jayden Castaldo and Jessica Alling. Relatives and friends may call Saturday, July 31 from 8:45 to 9:45 a.m. at the Buranich Funeral Home, 5431 W. Genesee St., Camillus. A funeral Mass will follow at 10 a.m. in St. Joseph’s Church. In lieu of flowers, contributions may be made to St. Jude Children’s Research Hospital, 501 St. Jude Place, Memphis, TN 38105 or to People for the Ethical Treatment of Animals (PETA), 501 Front St., Norfolk, VA 23510.
To order memorial trees or send flowers to the family in memory of David J. Wykle, please visit our flower store.