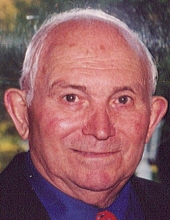 David N. Meluni, 95, of Camillus, passed away Tuesday, January 29, 2019 at home, surrounded by his loving family. Born in Anagni, Italy, he came to America in 1961 when he was 37 years old. David was employed with Millbrook Bakery for 18 years before retiring in 1985 and previously worked for Cappuccilli Construction for six years.

David was predeceased by his wife, Beatrice, in 1997; sister, Amerina Ciocci; and brother, Dante Meluni.

Relatives and friends may call Sunday, February 3 from 1 to 4 p.m. at the Buranich Funeral Home, 5431 W. Genesee St., Camillus.

A funeral Mass will be celebrated Monday, February 4 at 10 a.m. in St. Joseph's Church, 5600 West Genesee St., Camillus. David will be laid to rest in Woodlawn Mausoleum, Syracuse.
To order memorial trees or send flowers to the family in memory of David N. Meluni, please visit our flower store.