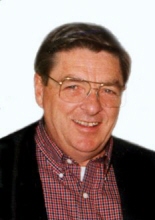 David P. Kenna, 71, of Camillus, passed away Tuesday, May 5, 2009 after a short battle with cancer. Born in Buffalo on Saturday, July 24, 1937, he was raised in Rochester and lived in Camillus since 1966. He was the son of Frank C. Kenna and Mary Constance Montgomery Kenna. David graduated from Aquinas Institute in 1955, University of Windsor in Ontario in 1960, and University of Rochester in 1962. A sales manager for Procter & Gamble, he retired in 1996 after 31 years. He was also a former high school teacher for three years at Aquinas Institute in Rochester. David was a communicant of St. Joseph's Church and member of the Optimist Club, Camillus Ski Hill Assn., Maxwell Library board of trustees and ECHO Meals on Wheels board of directors. He was also a volunteer for catFISH and served as an advisor to the Onondaga County Public Library System. In 2007 David received the Citizen of the Year Award from the Greater Camillus Chamber of Commerce for his commitment to service in the community. He enjoyed reading, especially American history, gardening, lawn and yard work. He loved music and collecting art from his many travels around the world. He was particularly passionate about his family and doing things for others. Dave's granddaughter, Daisy Marie Kenna, died in 2003. Surviving are his wife of 43 years, the former Marie Pel; sons and daughters-in-law, Robert F. and Kelly Kenna of Liverpool and Gregory D. and Krista Kenna of Camillus; grandchildren, Morgan, Gavin, Ellie and Hannah Kenna; sisters and brother-in-law, Mary Pat McStravick of Dallas, Texas and Kim and Russell Paul of Orchard Park; brother and sister-in-law, Rick and Nancy Kenna of Orlando, Florida and several nieces and nephews. Services will be at 10:30 a.m. Monday, May 11, 2009 in St. Joseph’s Church where a funeral Mass will be celebrated. Relatives and friends may call Sunday, May 10, 2009 from 1 to 4 p.m. at the Buranich Funeral Home, 5431 W. Genesee St., Camillus. David will be laid to rest in Greenlawn Cemetery, Warners. In lieu of flowers, contributions may be made to Hospice of CNY, 990 Seventh North St., Liverpool, NY 13088 or to St. Joseph's Church Food Pantry, 5600 W. Genesee St., Camillus, NY 13031.
To order memorial trees or send flowers to the family in memory of David P. Kenna, please visit our flower store.