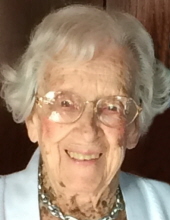 Doris Isabelle Carpenter, of Marcellus, passed away on Thursday, October 4, 2018 at Crouse Hospital at the age of 103. Born in Buffalo, she was the daughter of Isabelle and A. Warren Anderson. Doris was a graduate of SUNY at Geneseo and received her degree in education at SUNY at Buffalo. She taught three years in Huntington, Long Island before marrying her high school sweetheart, Walter Carpenter.

The family moved to Marcellus in 1954. Mrs. Carpenter began teaching first grade at the Kathryn Heffernan Elementary School in Marcellus until her retirement in 1978. Following retirement, she was a volunteer worker at Community Hospital for several years. She was a member of the First Presbyterian Church in Marcellus, Red Hats Society and Marcellus Retired Teachers Organization. Doris and Walter were active members of the Tuscarora Golf Club for several years until Walter passed away in 2008.

Doris’ greatest pleasure was spending time with her family. She will be greatly missed by all.

Calling hours will be Wednesday, October 10 from 4 to 7 p.m. at the Buranich Funeral Home, 5431 W. Genesee St., Camillus. Services will follow at 7 p.m. at the funeral home.

In lieu of flowers, donations in Doris’ name may be made to the Marcellus Free Library, 32 Maple St., Marcellus, NY 13108.
To order memorial trees or send flowers to the family in memory of Doris Isabelle Carpenter, please visit our flower store.