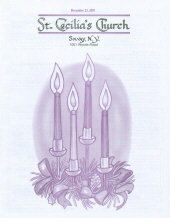 Edward A. Armani, 79, of Westvale, quietly passed away Friday, January 23, 2009 after a brief battle with cancer. Ed was born Sunday, March 31, 1929 in Solvay to Modesta and Ermen Armani. He was a lifetime communicant at St. Cecilia's Roman Catholic Church. He graduated from Solvay High School in 1947 and served in the United States Army. Edward retired from Solvay Process/Allied Chemical in 1986, after 39 years of employment. Edward was a kind and gregarious man who was an avid hunter, gardener and furniture restorer. He especially enjoyed spending time with family. He was a vociferous attendee at almost all athletic events that his children and grandchildren participated in, from youth leagues through collegiate athletics, whether at home or on the road. In his later years, Edward could often be found driving his 1973 light blue Volkswagen bug. He was an honored member of the Solvay Tyrol Club. Edward was predeceased by his loving son, Christopher, who died in 1989. In October, Edward and his wife, Inez (Paussa), celebrated their 50th wedding anniversary. Surviving are his devoted wife, Inez; sons and daughters-in-law, John and Audrey Armani of Rochester, Michael and Kimberly Armani of Erieville and Thomas and Denay Armani of Madison, Wisconsin; grandchildren, Cassandra (Ian) Coyle, and Laura, Cara, Elise, Julia and Lauren Armani; great-grandsons, Christopher “Fast Eddy”, and Nicholas Coyle; brother, Gerald; and sister, Louise Phillips. Services will be at 9:30 a.m. Tuesday, January 27, 2009 in St. Cecilia’s Church where a funeral Mass will be celebrated. Friends may call Monday, January 26, 2009 from 3 to 6 p.m. at the Buranich Funeral Home, 5431 W. Genesee St., Camillus. Burial will be in the Onondaga County Veterans Memorial Cemetery. In lieu of flowers, contributions may be made to Hospice of Central New York, 990 Seventh North St., Liverpool, NY 13088-6148 or to St. Cecilia’s Memorial Restoration Fund, 1001 Woods Rd., Solvay, NY 13209.
To order memorial trees or send flowers to the family in memory of Edward A. Armani, please visit our flower store.