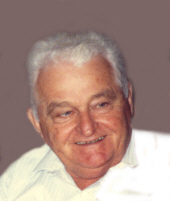 Edward J. Kaczmarek, 90, of Syracuse, passed away Sunday, January 16, 2011 at St. Joseph’s Hospital Health Center. Born in Solvay on Sunday, April 25, 1920, he was the son of Andrew Kaczmarek and Kathryn Szuba Kaczmarek. A lifetime resident of Solvay, he was an Army Air Corps veteran of World War II. He was employed by Niagara Mohawk Power Corp. for 35 years, retiring in 1981. Edward was predeceased by two sisters. Surviving are his wife of 63 years, Petronella; son and daughter-in-law, Edward and Annette Kaczmarek of Solvay; daughters and son-in-law, Carol Lovell of Skaneateles, Anne Kaczmarek of Texas, Mary Kay Kaczmarek of Solvay and Denise and Michael Sieklucki of Solvay; brother, Arthur Kaczmarek of Syracuse; 12 grandchildren; and three great-grandchildren. Relatives and friends may call Tuesday, January 18 from 4 to 7 p.m. at the Buranich Funeral Home, Camillus. Services will be at 9:30 a.m. Wednesday, January 19 at the funeral home and at 10 a.m. in Holy Family Church where a funeral Mass will be celebrated. Edward will be laid to rest in Sacred Heart Cemetery Lakeland.
To order memorial trees or send flowers to the family in memory of Edward J. Kaczmarek, please visit our flower store.