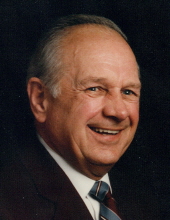 Edward J. Rusinko, 94, of Syracuse, passed away on Monday, September 23, 2019. Born in Auburn, he was a resident of the Valley of Syracuse for many years. Ed was an established businessman who owned Shell gas station and later the Seneca Liquor Store, both on the corner of Valley Drive and Seneca Turnpike. He was a parishioner of Our Lady of Lourdes Church and a member of their Holy Name Society. He was also a member of the Southside Businessmen’s Assoc. and American Legion Post 1468.

Ed was predeceased by his wife, Dorothy.

Services will be private. Ed will be laid to rest in St. Agnes Cemetery, Syracuse.
To order memorial trees or send flowers to the family in memory of Edward J. Rusinko, please visit our flower store.