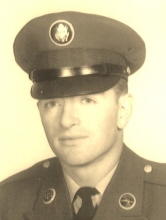 Edwin A. Towers, 74, of Camillus, passed away Sunday, November 9, 2014. He was born on October 11, 1940, the son of the late John "Jack" Towers and Grace Marion Brown Towers of Houlton and Fort Fairfield, Maine. Ed graduated from Fort Fairfield High School in 1958 where he was active in music and athletics. He was an alumnus of the former Ricker College in Houlton where he earned a B.S. degree in English and history. He also earned a M.S. degree in English education and a C.A.S. degree in educational administration from Syracuse University. An educator for over 30 years, Ed retired from the Syracuse School District and then was a substitute teacher in the West Genesee and Skaneateles School Districts. Ed was a U.S. Army veteran, having served during the Vietnam War from 1966-1969. During his life, he enjoyed working out, playing basketball, bicycling, camping, trips to Maine, working on family genealogy and deer hunting in the fall. He especially enjoyed his dogs, German Shepherds and Golden Retrievers. He was also a New York Yankees fan. Ed was predeceased by his sister, Sister Lura Grace, in 2013; and half brother, John Towers, in 2009. Surviving are his wife, Theresa Pullano Towers; father-in-law, Salvatore Pullano of Camillus; mother-in-law, Cecelia Pullano of Camillus; sister-in-law, Rita Pullano Downing and her husband John Downing of Camillus; cousin, Edward Stewart of Ithaca; half sister, Patricia Towers Struble of Pittston, ME; nephew, Scott Lane of New York City; and niece, Sarah Struble of Jamaica Plain, MA. A funeral Mass will be celebrated at 10 a.m. on Wednesday, November 12 at Holy Family Church, Fairmount. Ed will be laid to rest in Onondaga County Veterans Memorial Cemetery. In lieu of flowers, contributions may be made to Stack Veterinarian Hospital, 5092 Velasko Rd., Syracuse, NY 13215 in memory of Ruger, Ed's German Shepherd dog.
To order memorial trees or send flowers to the family in memory of Edwin A. Towers, please visit our flower store.