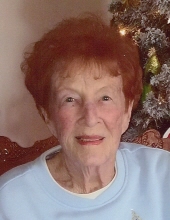 Evelyn Ruth Snyder, 91, of Camillus, passed away quietly on Sunday, December 25, 2016 at Crouse Hospital, surrounded by her family, after a brief illness. Born in Rensselaer, NY, she graduated from Van Rensselaer High School where she met her husband, Clifford J. Snyder Jr. They were married for 53 years and built their own home in East Greenbush where they raised their family before moving to Camillus in 1982.

Evelyn worked briefly for the NY Telephone Co. in Albany and was a homemaker since 1950. She was a member of St. Michael's Lutheran Church for 35 years, an active member of the Camillus Senior Citizens and an avid fan of Syracuse University basketball. Most of all, she was a dedicated mother and grandmother.

Relatives and friends may call Wednesday, December 28 from 2 to 6 p.m. at the Buranich Funeral Home, 5431 W. Genesee St., Camillus.

Services will be at 10 a.m. Thursday, December 29 in St. Michael's Lutheran Church. Evelyn will be laid to rest in St. Matthew's Lutheran Cemetery, Glenmont.

Please share condolences at www.BuranichFH.com
To order memorial trees or send flowers to the family in memory of Evelyn R. Snyder, please visit our flower store.