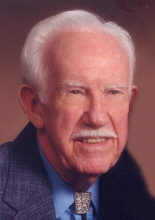 F.G. “Jerry” McGivern, 88, of Camillus, passed away Friday, September 24, 2010 at Iroquois Nursing Home. Born in Kearny, New Jersey on Sunday, December 4, 1921, he was the son of Patrick Joseph McGivern and Cathrine Anne Madden McGivern. He and lived in Camillus since 1962. He graduated from Kearny High School and attended the Newark Engineering Institute. Jerry was a franchise manager for Employees Tire Warehouse. He was also in the U.S. Maritime Service. Jerry was a communicant and usher of St. Joseph´s Church and member of its Golden Agers. He was predeceased by his first wife, Carol, on October 6, 1969. Surviving are his wife of 38 years, the former Helen Bogart; sons and daughters-in-law, Dennis and Debi McGivern of Merrimack, New Hampshire, Matthew and Leigh McGivern of Laurel, Maryland and David and Cathy Bogart of Clay; daughters and sons-in-law, Barbara Russell of Bunker Hill, West Virginia, Frances McGivern of Westvale, Deborah and Stan Simon of Camillus and Mary Beth and Bob Capella of Cazenovia; sister, Madeline McEnroe of Ft. Myers, Florida; 20 grandchildren and 12 great-grandchildren. Relatives and friends may call Monday, September 27 from 4 to 7 p.m. at the Buranich Funeral Home, 5431 W. Genesee St., Camillus. Services will be at 10 a.m. Tuesday, September 28 at the funeral home and at 10:30 a.m. in St. Joseph’s Church where a funeral Mass will be celebrated. Jerry will be laid to rest in Greenlawn Cemetery, Warners. Contributions may be made to St. Joseph's Church, 5600 West Genesee St., Camillus, NY 13031.
To order memorial trees or send flowers to the family in memory of F.G. (Jerry) McGivern, please visit our flower store.