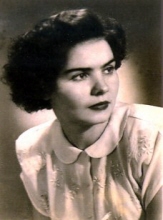 Ganna Antonivna Bindas Myagkota, 82, of Jamesville, died Tuesday, January 20, 2009 at University Hospital. Born in a Ukrainian village in Ternopil Region, Veselivka, on November 29, 1926, she was the daughter of Anton Bindas and Daria Feschuck Bindas. Ganna was born into a Christian family where Christ's ideals were instilled in her heart through the teachings of the Bible, songs and fellowship with other people in faith. She remembered fondly her father, Anton, who led his family in the Lord. Ganna passed on her faith to her siblings and later her sons and grandchildren. Her late brother, Peter, recalled that it was his sister Ganna who taught him the Lord's Prayer. Ganna's name in itself conveys the progression of a remarkable life that she led. Ganna as a child, Antonivna as a daughter and sister, Bindas as a young lady and Myagkota as a loving wife, cherished mother and warm grandmother. Having led a very turbulent life from an early age, Ganna struggled to always put her faith in the Lord. She was the fifth child of the family. After losing her mother at the age of five, Ganna took care of her younger siblings and later assisted her stepmother with household chores. After graduating from high school, Ganna continued to pass on her knowledge through teaching in an elementary school. The years of World War II were particularly difficult for her family. Her trials continued after the war when her family was sent to the Urals for hard labor in the coal mines where her father and one of her brothers lost their lives. Along with her sister, Ganna escaped to Poland where she spent much of her youth. In 1955 Ganna returned to her family in Veselivka. Five years later, she moved to Ternopil to pursue a degree in teaching before getting married to her husband, Stefan on April 30, 1961. Life in Ternopil was not easy. Although Ganna was forced to give up her teaching profession due to Communist persecution, she continued to instill her knowledge and care into her three children, Anton, Peter and Yuri. She paid particular attention to their spiritual and intellectual development, in spite of adversity and persecution by the Soviet Government. Ganna and Stefan were active in the Pentecostal Christian community located at Dovzhenko Street in Ternopil. She was most comforted in her last days together with Stefan that, by the grace of God, their children got to know Jesus as their Savior and Lord. Ganna's constant struggle to provide for her family both physically and spiritually was alleviated when she came to the United States in 1995. She praised God for this country as a land of freedom, prosperity and hope. She was finally emancipated of her struggles and happily continued her days by doing what she enjoyed most, raising her nine grandchildren, serving the Lord through prayer and song, reading, writing letters and attending services at the First Ukrainian Pentecostal Church of Syracuse. Ganna's advice to her children and grandchildren was to enjoy the time that we all have together as a family while reminiscing of the fact that her family was scattered all over the world, including Ukraine, Poland, Germany, Bulgaria, Canada and parts of the U.S. Therefore, her happiest memories in this country were seeing her whole family gathering together for the holidays. Ganna led a fulfilling life in the Lord. Although she always wished to visit the Holy Land, her family believes that she is now with the Lord in the New Jerusalem. Her family, including her husband, three children, nine grandchildren, sister, and brother, are comforted with this belief. Her greatest wish was for all her children and grandchildren to accept Jesus Christ as their Savior and follow His lead in their lives. In addition to spending time with her family, Ganna enjoyed cooking, baking, reading and singing. Surviving are her husband of 47 years, Stefan; sons and daughters-in-law, Yuri and Natalia of Jamesville, Anton and Valintina of Manlius and Peter and Nadia of Camillus; nine grandchildren; sister, Lyudmila Panchuk of Seattle, Washington; and brother, Stefan Bindas of Kiev, Ukraine. Dear wife, mother, grandmother, sister and friend: For now we are saying good bye, comforted, knowing that we will all meet together again in Heaven. Services will be at 6 p.m. Thursday, January 22, 2009 and 10 a.m. Friday, January 23, 2009 at Buranich Funeral Home, 5431 W. Genesee St., Camillus. Burial will be in Greenlawn Cemetery, Warners.
To order memorial trees or send flowers to the family in memory of Ganna Myagkota, please visit our flower store.