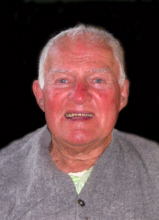 George A. Webster, 93, of Camillus, passed away peacefully on Friday, June 17, 2011 at The Centers at St. Camillus after a long illness. Born in New Bedford, Massachusetts on Wednesday, May 1918, he was the son of John and Barbara Webster. George and his loving wife of 65 years, the former Dorothy Flagg, summered in Vinalhaven, Maine, but always considered Syracuse their home where they raised their family of twelve: sons, Randall (Kathleen), William (Linda), Peter (Margaret), Paul (Mary Jo), George (Diane), Noel (Dana), Andrew (Charity); and daughters, Dorothy (Paul) Tasillo, Jane (Charles) Evans, Jo Ann (Robert) Donovan, Virginia (Kenneth) Hund and Constance Webster (Barbara Keen). Also surviving are 32 grandchildren; and nine great-grandchildren. George was predeceased by brothers, John and Robert. A graduate of New Bedford High School, he served in the Merchant Marines during World War II, making numerous trips to England and France to support the war effort. After leaving the Merchant Marines, he became employed by Hooper Holmes Bureau. He was a long-tenured, successful manager of the Syracuse office until leaving the company. He went on to start his own auto, home and life-related insurance agency until he retired at the age of 72. He also worked evenings at Sears during these years to support his family. He was a communicant of Holy Family Church. As a young man in New Bedford, George became attracted to the collection and restoration of antiques. This avid interest in antiques was enthusiastically maintained by him throughout his life. A generous man, he would offer appraisal advice and repair antiques for friends and family as a kindness. His generosity was also reflected in his willingness to offer his or his children’s labor to help out those in need in the neighborhood. A man of remarkable commitment and integrity, George will be greatly missed by his family and friends. A funeral Mass will be celebrated Monday, June 20 at 10 a.m. in Holy Family Church. Arrangements are by the Buranich Funeral Home, 5431 W. Genesee St., Camillus. George will be laid to rest in Vinalhaven, Maine. In lieu of flowers, contributions may be made to Maryknoll Sisters, 100 Ryder Rd., Ossining, NY 10562.
To order memorial trees or send flowers to the family in memory of George A. Webster, please visit our flower store.