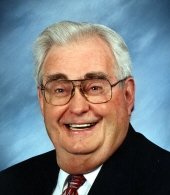 George Joseph Burke Sr., 77, of Camillus, passed away Tuesday, February 10, 2009 at University Hospital. Born in Philadelphia, Pennsylvania on Monday, May 11, 1931, he was the son of John J. Burke and Minerva Anna Schuster Burke. He lived in Glenside, Pennsylvania and Memphis, Tennessee until moving to Camillus in 1976. George attended Drexel Institute of Technology. Employed by Carrier Corp. as a product manager, he retired in 1992 after 30 years. He was a Navy veteran of the Korean Conflict. George was always civic-minded and very active in whatever community he lived in. Since moving to Camillus, his activities included the following: VFW Post 8664, American Legion Knifetown Post 1540, Camillus Elks Lodge, Camillus Historical Society and Town of Camillus Republican Committee. He also served on the Camillus Zoning Board of Appeals. He was a life member of ASHRAE, member of Roman Catholic Alumni Association in Philadelphia and communicant of St. Joseph's Church in Camillus. The family wishes to express its deep appreciation for the care and compassion provided to George and the entire family by the staff of University Hospital during this difficult time. Surviving are his wife of 55 1/2 years, the former Patricia Moore; daughter and son-in-law, Kathleen and Jim Egloff of Syracuse; sons and daughters-in-law, George "Jerry" and Jeanette Burke Jr. of Sherrill and Charles and Crystal Burke of Phoenix; brother and sister-in-law, Richard and Cora Burke of Philadelphia; grandchildren, Christopher, Jeremy, Jennifer, Molly, Danielle and Theresa; and several nieces and nephews. Services will be at 10 a.m. Monday, February 16, 2009 at the Buranich Funeral Home, 5431 W. Genesee St., Camillus and at 10:30 a.m. in St. Joseph’s Church where a funeral Mass will be celebrated. Relatives and friends may call Sunday, February 15, 2009 from 1 to 4 p.m. at the funeral home. George will be laid to rest in the spring in Maplewood Cemetery, Camillus. In lieu of flowers, contributions may be made in George’s memory to St. Jude Children's Research Hospital, 501 St. Jude Place, Memphis, TN 38105 or to Golisano Children's Hospital, c/o University Hospital, 750 E. Adams St., Syracuse, NY 13210.
To order memorial trees or send flowers to the family in memory of George Joseph Burke Sr., please visit our flower store.