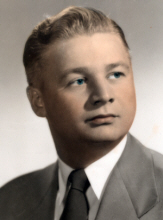 George Joseph Ulrich, 86, of 118 Crabapple Lane, Syracuse, passed away Thursday, September 15, 2011 at The Centers at St. Camillus. Born in Newark, New Jersey, on Wednesday, May 20, 1925, he was the son of George J. Ulrich and Vera Sears Ulrich. He moved to Syracuse in 1970 after living in New Jersey and Pennsylvania. George was a Navy veteran, having served in World War II and the Korean Conflict. He retired from Nationwide Insurance Co. in 1990 as a district sales manager. He was a communicant of Holy Family Church where he was a Eucharistic minister and member of the funeral choir and Holy Name Society. For several years, he was a New York State track official. George was also an avid tennis player. He was a graduate of Rutgers University and for many years served as treasurer for the Alumni Association of Central New York. George was predeceased by his brother, Robert Ulrich and sister, Joan Molinari. Surviving are his wife of 62 years, the former Jane Conlon; sons and daughters-in-law, Garrett and Linda Ulrich of Longmeadow, Massachusetts, David and Colleen Ulrich of Mt. Laurel, New Jersey, and Robert and Cindy Ulrich of Ridgefield, Connecticut; daughters and sons-in-law, Jane and Richard Rubsamen of Incline Village, Nevada, Maureen and Joseph Perleoni of Camillus, and Carolyn and Joel MaHarry of Santa Monica, California; and many nieces, nephews and cousins. He was also the proud grandfather of 11 grandchildren, Meredith Ulrich, Lara (Ken) Leone, Michelle and James Ulrich, Michael, Kate and Robert Rubsamen, Kaelyn, Lindsay and Taylor Ulrich and Joseph Perleoni III. Relatives and friends may call Monday, September 19 from 4 to 7 p.m. at the Buranich Funeral Home, 5431 W. Genesee St., Camillus. A funeral Mass will be celebrated at 10 a.m. Tuesday, September 20 in Holy Family Church. George will be laid to rest in the Onondaga County Veterans Memorial Cemetery. In lieu of flowers, contributions may be made to Holy Family Church, 127 Chapel Dr., Syracuse, NY 13219.
To order memorial trees or send flowers to the family in memory of George Joseph Ulrich, please visit our flower store.