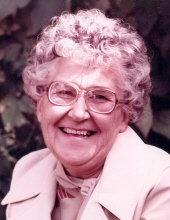 Helen Myrdek, 96, of Camillus, passed away Tuesday, September 19, 2017 at The Centers at St. Camillus. A lifetime resident of the Syracuse area, she moved to Camillus in 1945.

During her early years, Helen worked for Syracuse China for 12 years. She then worked in the cafeteria of the West Genesee School District, retiring after 20 years. She always made sure the students had enough to eat and enjoyed when the students recognized her outside of school. She was a member of the CNY National Organization for Women. An avid reader, Helen also enjoyed sewing, especially crocheting and knitting, and traveling to Texas to visit her family. She enjoyed a good joke and a laugh.

Helen always had a smile on her face and a kind word, especially to the people at the P&C, which she visited daily.

Relatives and friends may call Saturday, September 30 from 10 a.m. to noon at the Buranich Funeral Home, 5431 W. Genesee St., Camillus.

Services will follow at noon at the funeral home. Burial will be private.

Share condolences at www.BuranichFH.com
To order memorial trees or send flowers to the family in memory of Helen Myrdek, please visit our flower store.