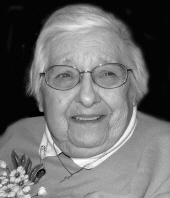 Helen S. Fatcheric, 93, formerly of Fairmount, passed away Friday, July 22, 2011 in Worcester, Massachusetts. She was the beloved widow of Frank Fatcheric who predeceased her on Friday, January 15, 1982. Born in Syracuse on Thursday, June 27, 1918, she was the daughter of the late Thomas and Anna (Bodner) Smolnycki. Helen was educated in Syracuse public schools. A homemaker for many years, she had previously worked as a food service manager at Holy Family School in Fairmount. She was a life member of the Fairmount School PTA. An Attleboro resident for the past three years, she had previously lived in Wrentham from 2000-2008. Helen is survived by her loving family: two sons and daughter-in-law, Richard and Dolores Fatcheric of Princeton, Massachusetts and Thomas A. Fatcheric of Wadsworth, Ohio and one daughter and son-in-law, Margaret and Joseph Whitbread of Wrentham, Massachusetts. She was also the dear sister of Katherine Bunn of Syracuse and the devoted grandmother of eightgrandchildren and great-grandmother of 19 great-grandchildren. A funeral Mass was celebrated Monday, July 25 at St. Mary’s Church in Wrentham Centre, Masachusetts. Graveside services will be at 9 a.m. Wednesday, July 27 in St. Mary's Cemetery, DeWitt. Contributions may be made in memory of Helen to the Perkins School for the Blind, 174 North Beacon St., Watertown, MA 02472 or to Holy Family Church, 127 Chapel Dr., Syracuse, NY 13219.
To order memorial trees or send flowers to the family in memory of Helen S. Fatcheric, please visit our flower store.