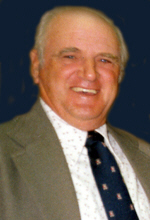 Jack Strobel, 84, of Warners, passed away Sunday, December 19, 2010 at Newark Wayne Community Hospital, after a period of declining health in an otherwise full active life. Born in Gainfarm, Austria on Sunday, January 31, 1926, he was the son on Raymund Strobel and Rosa Tietz Strobel. Jack came to the United States in 1934 and was a graduate of Warners High School. He was a veteran of World War II and the Korean Conflict. He retired in 1985 after 33 years with Burns Bros. and was formerly employed by Davco Automatic Sprinkler Co. Jack was a member of the Local Union 669 of the National Automatic Sprinkler Industry, American Legion Post #113 and the VFW Post #153. He was a communicant of St. Augustine's Church. An avid golfer, Jack was a former member of the Camillus Country Club and currently a member of Ironwood Golf Club. He also enjoyed the outdoors and was an avid hunter and fisherman. He was devoted to his family and enjoyed spending time with them. Jack was predeceased by his sister, Frieda Klaben. Surviving are his wife of 57 years, the former Irene “Renie” Klaben; daughter and son-in-law, Sue and Terry Matteson of Baldwinsville; William Strobel of Fulton; daughter-in-law, Doris Strobel of California; four grandchildren; five great-grandchildren; and several nieces and nephews. Relatives and friends may call Wednesday, December 22 from 4 to 7 p.m. at Buranich Funeral Home, 5431 W. Genesee St., Camillus. Services will be Thursday, December 23 at 11 a.m. at the funeral home. Spring burial will be in Belle Isle Cemetery, Warners. In lieu of flowers, contributions may be made in Jack’s name to one's favorite charity.
To order memorial trees or send flowers to the family in memory of Jack Strobel, please visit our flower store.