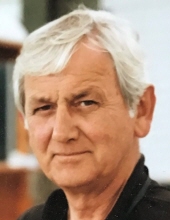 James David Smolinski, of Syracuse, passed away Sunday, December 27, 2020 at his home. He was a kind and gentle man who enjoyed his family, friends and his many grandchildren.

Jim graduated from Solvay High School in 1957 at age 16, then took a year off before attending and graduating from Le Moyne College in 1962. He served in the Army National Guard for six years where he trained as a medic while at Fort Sam Houston in San Antonio, TX. He raised his family in Massachusetts before returning to Syracuse. Jim worked in sales for many years with several companies, eventually retiring from Lewis Goodman, Inc.

Jim loved old western movies, doing crossword puzzles and spending time having coffee with friends and family. He was a fan of all sports, especially the New England Patriots and Boston Red Sox. He also enjoyed golf, tennis and was his grandson Brady’s biggest fan and loved watching him play baseball, whose tournaments at Cooperstown were some of his greatest memories.

Services will be held at a later date in Summer 2021 at the convenience of the family.

If you’d like to read more about Jim’s life, click here https://major-smolinski.com/PORTRAITS/RECBABYJIM.html.
To order memorial trees or send flowers to the family in memory of James David Smolinski, please visit our flower store.