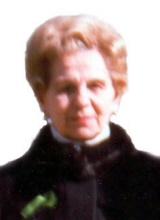 Jane Bialczak Whitbread, 88, of Solvay, passed away Tuesday, May 5, 2009 at Community General Hospital. A lifetime resident of the Syracuse area, she was born on Tuesday, February 8, 1921 and was the daughter of Felix Bialczak and Anna Kaczmarczyk Bialczak. She graduated from Vocational High School. Jane spent most of her working years with Dey Bros. as their bookkeeper and was also employed with Byrne Dairy and Chappells. She was a communicant of St. Joseph's Church and St. Cecilia’s Church. She served as Eucharistic minister and lector, was a member of the Legion of Mary and enjoyed reading and gardening. Jane was predeceased by her husband, John, in 1977; and sister, Sophie Czyz, in 2006. Surviving are her daughter and son-in-law, Carol Ann and Donald Wild of Tennessee; five grandchildren; nine great-grandchildren; sister and brother-in-law, Stella and George Przekwas of North Syracuse; and several nieces and nephews. Services will be at 2 p.m. Thursday, May 7, 2009 at Buranich Funeral Home, 5431 W. Genesee St., Camillus and at 2:30 p.m. in St. Joseph’s Church where a funeral Mass will be celebrated. Relatives and friends may call preceding the service on Thursday from 1 to 2 p.m. at the funeral home. Burial will be private in Greenlawn Cemetery, Warners. In lieu of flowers, contributions may be made to one’s favorite charity.
To order memorial trees or send flowers to the family in memory of Jane Bialczak Whitbread, please visit our flower store.