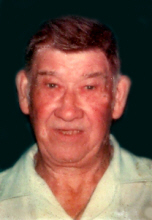 Jean W. Teachout, 92, of Fairmount, passed away Monday, November 28, 2011 at his niece’s home in Liverpool. Born in Erie, Pennsylvania on Friday, December 6, 1918, he was the son of Charles Henry Teachout and Inez Yager Teachout. He lived in Jordan until moving to Fairmount in 1952. Jean was an Army veteran of World War II. He retired in 1980 after 25 years with Meade Containers and was formerly with Syracuse China for 12 years. He was a daily communicant of Holy Family Church, former member of the Holy Name Society, and a member of the VFW Post 2893. Jean was predeceased by his first wife, the former Ann Potucek, in 1969; his second wife, the former, Anna Preske, in 2003; brothers, Ken and Dick; sisters, Kate and Mary; and stepson, Gary Elmore. Surviving are his niece, Debbie (Bob); stepson, Donald (Linda) Elmore; sisters, Barbara Spier and Beverly Taylor; brothers, Charles, Walter, Robert and Keith; several grandchildren, great-grandchildren, nieces and nephews; and Mary Lou Preske and family. Relatives and friends may call Thursday, December 1 from 10:30 a.m. to 12:30 p.m. at Buranich Funeral Home, 5431 W. Genesee St., Camillus. Services will follow at 12:30 p.m. at the funeral home and at 1 p.m. in Holy Family Church, where a funeral Mass will be celebrated. Jean will be laid to rest in Lakeview Cemetery, Skaneateles. In lieu of flowers, contributions may be made to Holy Family Food Pantry, 127 Chapel Dr., Syracuse, NY 13219.
To order memorial trees or send flowers to the family in memory of Jean Walter Teachout, please visit our flower store.