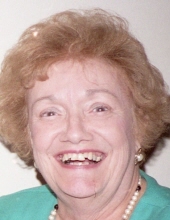 Joan Lauretta (Lyons) Romanow, 89, passed away peacefully, surrounded by her family on December 25, 2018. She was predeceased by her beloved husband of 61 years, Joseph D. Romanow, in 2013. Joan was born in Utica, NY and was the daughter of the late Eleanor and S.W. Lyons. She was the mother of five, grandmother of seven and great-grandmother of three. She was a graduate of Utica Free Academy.

Joan will always be remembered for her warm smile and her caring nature. In addition to devoting her time to family and friends, Joan participated in numerous volunteer activities both local and statewide. Joan first joined Home Bureau in 1953 and was one of the small group of women who organized Onondaga County as part of the New York State Federation of Home Bureaus. She held various elective offices at the chapter, county and district levels. In 1997 and 1998 she served as the state president. A Home Bureau Scholarship was established at Utica College in honor of Joan and was awarded to students in the field of Psychology - Child Life.

Joan was appointed to and served for eight years on the Onondaga Community Services Advisory Board for the County Department of Mental Health. She was also the first parent selected to serve on the Westhill School District's Special Education Committee.

Joan was a devoted mother, wife and friend. Joan and Joe moved to Syracuse after their wedding and lived in Westvale for over 55 years. They had a close-knit group of friends, "the Westvale crowd," with whom they traveled annually to tailgate at West Point and cross-country ski at Big Moose Lodge. Joan and Joe were known for their annual New Year’s Eve parties and impromptu get togethers. She loved to entertain, dance and work on crafts. Joan was a communicant of St. Charles Church.

A funeral Mass will follow at 10:30 a.m. in the church. Joan will be laid to rest in Greenlawn Cemetery, Warners.

In lieu of flowers, contributions may be made to Advocates Incorporated, Attn: Accounting Department, 636 Old Liverpool Rd., Liverpool, NY 13088.
To order memorial trees or send flowers to the family in memory of Joan Lauretta (Lyons) Romanow, please visit our flower store.