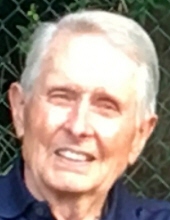 John D. Kleberg Sr., 86, of Syracuse, passed away Wednesday, January 6, 2021 at Upstate Community Hospital. He was a lifetime resident of the Syracuse area and enjoyed spending winters in Naples, FL. A 1952 graduate of Most Holy Rosary, John attended Assumption University in Canada for two years and earned a bachelor’s degree from Le Moyne College. He was employed with the family business, Karmelkorn Shop and retired after 30 years from Syracuse Supply Co. John was a former member of the Tuscarora Country Club. He was a devout Catholic and volunteered at St. Lucy’s Church. John was a loving husband, father and grandfather.

John was predeceased by his wife, Janet; parents, David and Agnes; and sister, Karen Peters.

Services will be a private. A celebration of John’s life will be held at a later date.

In lieu of flowers, contributions may be made to Upstate Golisano Children’s Hospital, 750 East Adams St., Syracuse, NY 13210.
To order memorial trees or send flowers to the family in memory of John D. Kleberg Sr., please visit our flower store.