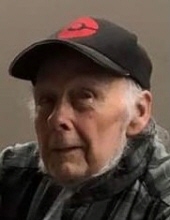 John E. Bennett of Greece NY passed away on March 20 2021 at the age of 90. John was an accomplished musician and artist as well as a great thinker always delving into the great mysteries of our time. Reading books on cutting edge theories of philosophy, music, science, chemistry, ohysics and even genetics all of which he applied to the development of his process for generating his patterns for his paintings. John though a musician all his life, having studied at Eastman as a child after he was found to have perfect pitch studying both piano and violin was most proud of this painting which he took up after retiring. Early on he posited that good musical composition could be translated to pattern and color to creat good painted artwork. He felt that his true legacy was in the process of generating patterns that he developed over the last 30 years culminating in his "Code of Order" In John's words: Many Patterns consist of a diverse group of elements, ordered so as to project a harmonious whole. An artist's intuitive ordering is adequate for most such patterns, but if the elements must be diverse, ordered, and contiguous, then intuition needs a little help. For this artist, help came from a generative tiling process, developed as outlined briefly below. These are fully contiguous, radially symmetric patterns composed of multiple, diverse subjects, where subjects can be curvilinear, rectilinear, or mix there of. The subject complements of those patterns utilizing curvilinear or rectilinear subjects exhibit a mix of symmetries- bilateral, radial and asymmectric. In the case of mixed linearity subjects, all of that pattern's subjects must perforce be asymmectric. The code for order philosophy developed herein was inspired by - (1) Ordering of models by 20th century physicists which included symmetry devolution. (2) Ordering of symphonic movements by composers, which included ABA form (a radially symmetric pattern is in ABA form). The ultimate example of coded pattern generation is Mother Nature, who beat us by a billion or so years- consider her employment of DNA coding for amino acid patterns(proteins). The difference is that she coded for survival, whereas her children code for order. John was also a bit of a scamp with a great sense of humor.One of his favorite stories of his youth revolved around how he got his first job. He lived with his parents in Rochester across the street from his best friend Jerry Warnock. The boys wanted to drive to Buffalo for the day but had no means of transportation so John, my father, borrowed his parents car telling them it was for the purpose of taking a job interview. They spent the day goofing off around Buffalo and then before they left my Father decided he had better get an inverview somewhere so he stopped at a random electronics company on the way back and filled out an application. On the way home they decide they should fill the gas tank when they were about halfway past the entrance to a gas station causing them to skid up the driveway, around the corner knocking the front off of and coming to rest in front of the gas pump. What happened next caused my father's friend Jerry to forever refer to him as the "master of all situations'. The attendent came running out and my father rolled down the window and said, "I'll have two dollars worth." To which the stunned attendent replied, "We're closed." My father pulled out and continued home to Rochester. That application my father filled out at that random company on the way home to cover their 'joy' ride resulted in his first job. And then there was the moose head.... My father and his friend Jerry found a Moosehead somewhere and decided it would look great on the wall of their apartment. They tried for over an hour to get it through the door and no matter how they turned it they could not fit it through the door. On the verge of giving up they decided to give it one more try so they backed up to the bottom of the stairs and ran full speed up the stairs and straight through the door and it went right through without touching either side. John was a generous and deeply caring man who went out of his way to help those in need and befriend those who just needed a friend.

John was predeceased by his son Keith and his ex-wife and friend Jean Johnson.

John is survived by his daughter Anne and husband Mark who he viewed as a son as well as his dear friend Ellen who along with her son Nick and the rest of her family were also viewed as family. There will be no services at this time.

In lieu of flowers, contributions may be made to the Lollypop Farm, 99 Victor Rd, fairport, NY 14450.
To order memorial trees or send flowers to the family in memory of John E. Bennett, please visit our flower store.