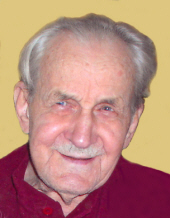 John G. Sobecki, 88, of Taunton, passed away Friday, February 12, 2010 at Crouse Hospital. Born in Syracuse on Friday, May 6, 1921, he was the son of Francis Sobecki and Tillie Nowicki Sobecki. A lifetime resident of the Syracuse area, he was a veteran of World War II and received the Purple Heart and Bronze Star. John was employed by Allied Chemical Corp. for more than 30 years and formerly taught welding at BOCES. He was a communicant of St. Charles Borromeo Church and member of Solvay Stanley B. Pennock Post 2893. An avid fisherman and hunter, he enjoyed spending time at his cottage on Sandy Pond and spending time with his family. John was predeceased by his daughter, Maria Sobecki. Surviving are his wife of 63 years, the former Irene Surdyk; daughter and son-in-law, Marcia and David Darrah of Charlotte, North Carolina; son and daughter-in-law, John and Christina Sobecki of Leesburg, Virginia; sister and brother-in-law, Florence and William Jutton of Syracuse; four grandchildren; three great-grandchildren; and several nieces and nephews. A funeral Mass will be celebrated at 9:30 a.m. Monday, February 15, 2010 at St. Charles Borromeo Church. John will be laid to rest at the Onondaga County Veterans Memorial Cemetery. Arrangements are by the Buranich Funeral Home, Camillus. In lieu of flowers, contributions may be made to St. Charles Borromeo Church, 417 South Orchard Rd., Syracuse, NY 13219 or to Taunton Fire Department, 4300 Onondaga Blvd. Syracuse, NY 13219.
To order memorial trees or send flowers to the family in memory of John G. Sobecki, please visit our flower store.