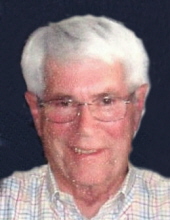 John Gerard Power Jr., 86, of Syracuse, passed away Tuesday, October 25, 2016 at the VA Medical Center. He was born to the late John and Noreen Power on May 1, 1930 in East Orange, NJ. John served in the Air Force from 1951 to 1954 and was a sergeant with the military police. John retired from Tenneco Automotive Co. A love for literature, he enjoyed poetry, history and Irish heritage. John also enjoyed baseball, fishing, music and spending time with his family and friends. We will miss his wit and sense of humor.

The family would like to thank the eighth floor of the VA Medical Center for their care and compassion given to John.

Services will be Saturday, November 5 at 11 a.m. at the Buranich Funeral Home, 5431 W. Genesee St., Camillus. Burial will be private.

In lieu of flowers, contributions may be made to St. Jude Children's Research Hospital, Golisano Children's Hospital or the ASPCA.

Share condolences at www.BuranichFH.com
To order memorial trees or send flowers to the family in memory of John Gerard Power Jr., please visit our flower store.