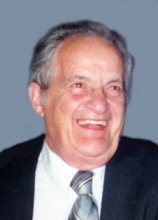 John M. Fusco Sr., 81, of Syracuse, passed away Tuesday, October 12, 2010 at University Hospital surrounded by his family. A lifetime resident of the Fairmount, Solvay area, he was born in Syracuse on Saturday, January 5, 1929 and was the son of Gaetano Fusco and Theresa Ferrara Fusco. John was an Army veteran of the Korean War. He retired in 1993 after 30 years with the U.S. Postal Service. After retirement, he worked for 16 years at the Wegmans in Fairmount. He was a communicant of Holy Family Church. He enjoyed spending time with his family and grandchildren, especially with their activities and sporting events. John was predeceased by his son, John Jr. on March 25, 1998. Surviving are his wife of 57 years, the former Theresa Rossetti; daughters and sons-in-law, Theresa and Steve Cizenski, Joanne and Tim MacConaghy and Maria and Ed Graveline; and daughter-in-law, Nancy Fusco, all of Syracuse; grandchildren, John III, Jeff and Emily Fusco, Eric, Marc and Amanda Cizenski, Jessica and Jason MacConaghy and Eddie and Vicki Graveline; sister, Rosemary Ianolo of Syracuse; brother, Gaetano Fusco of Texas; and several nieces and nephews. Relatives and friends may call Friday, October 15 from 4 to 7 p.m. at the Buranich Funeral Home, 5431 W. Genesee St., Camillus. A funeral Mass will be celebrated Saturday, October 16 at 9 a.m. in Holy Family Church. John will be laid to rest in Onondaga County Veterans Memorial Cemetery. In lieu of flowers, contributions may be made to the Golisano Children's Hospital, c/o University Hospital, 750 E. Adams St., Syracuse, NY 13210.
To order memorial trees or send flowers to the family in memory of John M. Fusco Sr., please visit our flower store.