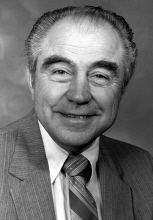 Joseph Rudy, 83, of Syracuse, passed away Sunday, November 14, 2010 at Community General Hospital. A lifetime resident of Syracuse, Joe was born on Thursday, June 2, 1927 and was the son of Michael Rudy and Mary Marcisin Rudy. He was raised on Mather Street and graduated from Central High School. In World War II, Joe served in the Navy on the USS Bon Homme Richard. Following his service, he had a wide-ranging career including time as a bartender, chef and restaurant owner. He later ran the Joe Rudy Company which provided manufacturing representation for producers of circuit boards and coils. Joe was an active member of SS Peter & Paul Russian Orthodox Church, Solvay-Geddes Veterans, Solvay Tigers, Western Hills Senior Citizens and the Masons. He was also involved in politics, serving as a councilman and chairman of the Republican Party for the Town of Geddes. He is survived by his wife of 59 years, Jeanette Matchuk; sons and daughters-in-law, John and Becky of Rochester, Jim and Lucia of Olympia, Washington, and Joe of San Francisco, California; brother and sister-in-law, Frank and Rosamond of North Syracuse, several nieces and nephews including Carol (Tim) Hammon, Linda (Tom) Steitler, Kathy Rudy, Frank Rudy and Nick (Kathy) Matchuk; grand nieces and nephews; and honorary grandchildren, Matty and Ethan Hammon. Joe was predeceased by his brothers, Michael and John; and sisters, Mary Esselburn and Anne Devine. Relatives and friends may call Thursday, November 18 from 4 to 7 p.m. at Buranich Funeral Home, 5431 W. Genesee St., Camillus. Panikhida services will be at 6:30 p.m. Services will be at 9:15 a.m. Friday, November 19 at the funeral home and at 10 a.m. in SS. Peter & Paul Orthodox Church, 401 Hamilton St., Syracuse. Joe will be laid to rest in SS. Peter & Paul Cemetery, Syracuse. Joe was a great believer in helping people and enjoying life. In lieu of flowers, contributions may be made to one’s favorite charity.
To order memorial trees or send flowers to the family in memory of Joseph Rudy, please visit our flower store.