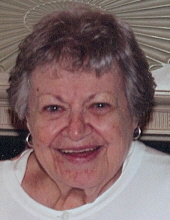 June K. Devaney, 91, of Syracuse, passed away Friday, August 11, 2017 surrounded by her family. A graduate of Central High School, she worked as a payroll clerk for General Motors before raising her family. June enjoyed bowling, ceramics, sewing, and baking which she was known for. However, what brought June the most joy was raising her children and spending time with her beloved grandchildren.

Relatives and friends may call Tuesday, August 15 from 4 to 6 p.m. at the Buranich Funeral Home, 5431 W. Genesee St., Camillus.

A funeral Mass will be celebrated Wednesday, August 16 at 12:30 p.m. in Holy Family Church, 127 Chapel Dr., Syracuse. June will be laid to rest in Greenlawn Cemetery.

In lieu of flowers, contributions may be made to the American Macular Degeneration Foundation at P.O. Box 515, Northampton, MA 01061.

Share condolences at www.BuranichFH.com
To order memorial trees or send flowers to the family in memory of June K. Devaney, please visit our flower store.