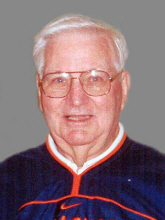 Leonard “Lenny” McManus, 80, of Camillus, passed away Sunday, May 17, 2009 at Iroquois Nursing Home. Born in Camillus on St. Patrick’s Day, Sunday, March 17, 1929, he was the son of Clyde L. McManus and Mabel Hartkopf McManus. A lifetime resident of Camillus, he was a 1947 graduate of Camillus High School. Lenny retired in 1987 as a senior accountant after 33 years with Niagara Mohawk Power Corp. He was a communicant of Holy Family Church and member of the Camillus Fire Department. He was also past president of the Power Employees Federal Credit Union, member of the Camillus Elks, and the Syracuse Brigadiers Drum Corps. Lenny was a recent inductee into the Camillus Sports Hall of Fame. He was predeceased by his brother, Irving, and sister, Constance Higby. Surviving are his wife of 58 years, the former Joan Lingyak; daughters and sons-in-law, Christine and Raymond Riddett of Warners, Karen and Paul Skardinski of Camillus, Denise and Jeffery Hanson of Livermore, California and Deborah McManus of San Ramon, California; sons and daughters-in-law, Michael and Allyson McManus of Fulton and Timothy and Rachel McManus of Liverpool; brother and sister-in-law, James and Donna McManus of Skaneateles; sister-in-law, Joyce McManus of Elbridge; 11 grandchildren; five great-grandchildren and several nieces, nephews and cousins. Services will be at 9:30 a.m. Friday, May 22, 2009 at the Buranich Funeral Home, 5431 W. Genesee St., Camillus and at 10 a.m. in Holy Family Church where a funeral Mass will be celebrated. Relatives and friends may call Thursday, May 21, 2009 from 4 to 7 p.m. at the funeral home. Lenny will be laid to rest in Greenlawn Cemetery, Warners. In lieu of flowers, contributions may be made to Holy Family Church, 127 Chapel Dr., Syracuse, NY 13219.
To order memorial trees or send flowers to the family in memory of Leonard 'Lenny' McManus, please visit our flower store.