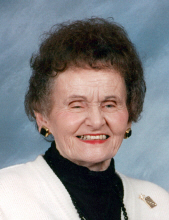 Margaret B. Fitzgerald, 87, of Camillus, passed away Monday, October 11, 2010 at Syracuse Home Association. Born on Thursday, September 27, 1923, she was the daughter of Arthur and Marian Smith Brooks. She was a graduate of Utica Free Academy. Margaret moved to Syracuse in 1987. She retired as operations officer after working more than 25 years with Savings Bank of Utica. She was a communicant of St. Joseph's Church and a member and former past president of the Camillus Senior Citizens. Margaret enjoyed spending time with the seniors and organizing bus trips to the casino. She also enjoyed playing cards and giving to various civic organizations. She was devoted to her family and enjoyed spending time with them, especially her grandchildren. Margaret was predeceased by her husband, Richard, on March 3, 2009 Surviving are her son and daughter-in-law, Richard and Kathleen of Camillus; grandchildren, Michael Fitzgerald of Vestal and his fiancée, Gretchen Rauch of Syracuse and Christine Fitzgerald of Washington, DC; sister and brother-in-law, Marian and Andrew Dunaway of Whitesboro; and several nieces and nephews. Relatives and friends may call Friday, October 15 from 4 to 7 p.m. at Buranich Funeral Home, 5431 W. Genesee St., Camillus. A funeral Mass will be celebrated Saturday, October 16 at 9 a.m. in St. Joseph's Church. Margaret will be laid to rest in Onondaga County Veterans Memorial Cemetery. Margaret’s family would like to express their deep gratitude to the entire staff of the Syracuse Home Association for the loving and professional care they provided over the last 19 months. In lieu of flowers, contributions may be made to St. Joseph's Church Food Pantry, 5600 W. Genesee St., Camillus, NY 13031.
To order memorial trees or send flowers to the family in memory of Margaret B. Fitzgerald, please visit our flower store.