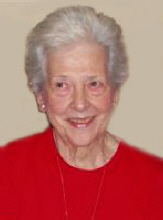 Margaret S. Gilroy, 84, of Santa Ana, California, formerly of Camillus, passed away Monday, June 13, 2011 at the Guardian Angels Homes, Santa Ana, California. Born in Pittston, Pennsylvania on Thursday, October 7, 1926, she was the daughter of Carl Albert Scherrieb and Margaret Anna Martin Scherrieb. She was raised in Pittston and lived in Rochester before moving to Camillus in 1974. Margaret graduated from St. John's High School and received a bachelor's degree from Wyoming Seminary. She was a communicant of St. Joseph's Church. Margaret was predeceased by her husband, Daniel F. Gilroy, April 6, 2007. Surviving are her daughter, Mary Ann Helmes of Newport Beach, California; sons, Daniel of Apple Valley, Minnesota, Brian of Laguna Hills, California, Thomas of Cary, Illinois and Edward of Syracuse; and 10 grandchildren. Relatives and friends may call Wednesday, June 22 from 9 to 11 a.m. at Buranich Funeral Home, 5431 W. Genesee St., Camillus. Services will follow at 11 a.m. at the funeral home and at 11:30 a.m. in St. Joseph's Church, where a funeral Mass will be celebrated. Margaret will be laid to rest Thursday, June 23 in St. Mary's Cemetery, Wilkes-Barre, Pennsylvania. In lieu of flowers, contributions may be made to the Alzheimer's Assn. of CNY, 441 W. Kirkpatrick St., Syracuse, NY 13204 or to St. Joseph's Church, 5600 W. Genesee St., Camillus, NY 13031.
To order memorial trees or send flowers to the family in memory of Margaret Mary Gilroy, please visit our flower store.