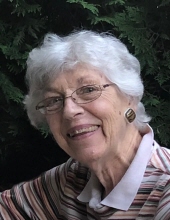 Maria "Riet" DeKleermaeker, 89, of Camillus, passed away Wednesday at home surrounded by her loving family. Born in Amsterdam, The Netherlands, she moved to Long Island, NY in 1957 and has lived in Camillus, NY since 1967. Riet worked
for over 30 years at Syracuse University’s Center for International Services where she created and managed the English Conversation Group program and retired in 2016 at the age of 83. The program has been in operation at SU for over 25 years and has since been replicated at universities across the country. Prior to becoming a mother, Riet worked for KLM Royal Dutch Airlines and then at the United Nations in NYC. She was a communicant of St. Joseph's Church. Her proudest job was raising her children. She loved spending time with her family, friends and international students, who became very much a part of her family.

In lieu of flowers, please donate to www.CARE.org or an organization of your choice. Riet’s wish is to love, accept and respect one another.
To order memorial trees or send flowers to the family in memory of Maria DeKleermaeker, please visit our flower store.