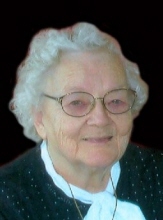 Mary B. Mural, 90, of Eastwood, passed away Saturday, March 21, 2009 at Crouse Hospital. Born in Syracuse on Monday, September 30, 1918, she was the daughter of Michael Miga and Mary Filip Miga. A lifetime resident of Eastwood, she was a graduate of Eastwood High School. Mary and her husband were summer residents of Cape Vincent on the St. Lawrence River for 20 years and enjoyed many sunsets together. She enjoyed spending time with her family, especially her grandchildren. Her husband, Walter, died April 16, 2004. Surviving are her son and daughter-in-law, William and Joann Mural of Camillus; daughter, Dianne (Mural) Clark of Oswego; sister, Margaret (Miga) Bonczek of Liverpool; grandchildren, Shawn (Maureen) Mural of Leesburg, Virginia, Sheri (Jack) Mural Callender of Vienna, Virginia, Brian Mural of Rochester, M. Lynne (Larry) Reynolds of Sackets Harbor, Betti (Robert) Berkley of Oswego; 10 great-grandchildren; niece, Janet (Al) Nickerson of Brewerton and nephew, Dr. James Bonczek of New York. Services will be at 3:30 p.m. Sunday, March 22, 2009 at the Buranich Funeral Home, 5431 W. Genesee St., Camillus with Rev. Michael Galuppi officiating. Relatives and friends may call preceding the service from 1 to 3:30 p.m. at the funeral home. Mary will be laid to rest at St. Mary's Cemetery, DeWitt on Monday, March 23, 2009. In lieu of flowers, contributions may be made to Francis House, 108 Michaels Ave., Syracuse, NY 13208.
To order memorial trees or send flowers to the family in memory of Mary B. Mural, please visit our flower store.