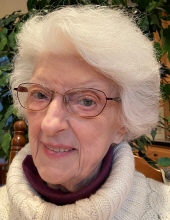 Mary (Tenenini) DeLorenzo, 91, of Lakeland, passed away Saturday, January 30, 2021, at home in peace and surrounded by her family. The daughter of Peter and Antonia Tenenini, Mary was born and raised in Corning, NY, graduated from Corning Free Academy in 1947 and immediately started working as a telephone operator for New York Telephone Company. She worked in various locations, including Homer, Cortland and Syracuse. In 1954, she married Emil DeLorenzo and settled with him on the northside of Syracuse as a full-time homemaker raising their children. They moved from the northside to Lakeland some 30 years ago.

When Mary returned to work in 1972, she was employed as a teaching assistant for the Syracuse City School District until her retirement. She specialized in helping students to read. This role was especially fulfilling for Mary because it was not until she started kindergarten that she learned to speak English, having spoken only Italian at home.

Mary was a member of Saint Marianne Cope Parish, Lakeland. In 2006, she took great pleasure in leading a project to collect parishioner prayers that were then published in the first “Parish Prayer Booklet: Church of Our Lady of Peace.” Mary’s day (after retirement) started with praying her daily prayers, which could last up to three hours. Anyone who went on Mary’s list for special prayers never went off of it. She enjoyed cooking and baking, especially carrying on special holiday traditions, and she was happiest staying home and having company.

Mary was predeceased by her husband of 64 years, Emil, in 2019 and by her first-born child, Marcia DeLorenzo, in 1961 at the age of five; also by her sister Laura Alteri, niece Anna Giardina of Corning and nephew August Alteri Jr. of Horseheads, NY.

A Mass of Christian Burial will follow at 11 a.m. in the church. Mary will be laid to rest in Assumption Cemetery, Syracuse.

Our Lady of Peace Church

Our Lady of Peace Church