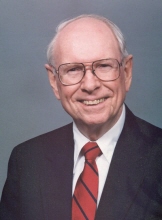 Melvin Wade Penfield, 87, of Camillus, died Friday, January 2, 2009 at Iroquois Nursing Home. Born in DuBois, Pennsylvania on Thursday, January 27, 1921, he was the son of Wade Barton Penfield and Bernice Mae Mowrey Penfield. He was educated at the Pennsylvania State University, (DuBois campus), Duff Iron City Business College and Rose Polytechnic Institute. A veteran of the Army Corps of Engineers, he served in the Philippines in World War II and saw active duty during the Korean War. Living in Camillus since 1957, Melvin was an accountant for GTE/Sylvania for 35 years, retiring in 1986. A former vestryman of St. Luke’s Episcopal Church, he was a board member and treasurer of both the Maxwell Memorial Library for 30 years and the Camillus Housing Authority for 20 years. He was also an AARP volunteer tax return preparer for the first 18 years of his retirement. An avid fan of local theater and music, Melvin also enjoyed golf, bridge and dining with friends. Melvin's wife, the former Marjorie Matthews, died October 10, 1985. His brother, Robert Allen Penfield of Cambria, California, died October 24, 2008. Surviving are his sons, Aric Matthews (Joy) Penfield of Camillus and Dr. Kevin Wade (Linda Wong) Penfield of Wilmington, Delaware; grandchildren, Christopher, Allyson, Lauren and Lisa Penfield; 11 nieces and nephews; and his dear close companion, Ann Carmola. A memorial service will be at 11 a.m. Saturday, January 10, 2009 in St. Luke’s Episcopal Church. Friends may call at the church from 10 to 11 a.m. preceding the service. Arrangements are by the Buranich Funeral Home, Camillus. Spring burial will be in Morningside Cemetery, DuBois, Pennsylvania. In lieu of flowers, contributions may be made to Maxwell Memorial Library, 14 Genesee St., Camillus, NY 13031 or to St. Luke's Episcopal Church, 5402 W. Genesee St., Camillus, NY 13031.
To order memorial trees or send flowers to the family in memory of Melvin Wade Penfield, please visit our flower store.