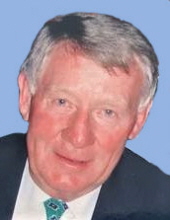 Michael Joseph Stack, 87 of Camillus, passed away peacefully at home in his sleep on Thursday surrounded by his loving family. He was born in Dromerin, Listowel, County Kerry Ireland to Mai Shanahan and Thomas Stack. When Michael was 19 years old, he immigrated to Syracuse, NY in 1952. His older brother, Edward Stack and Uncle Patrick Shanahan helped sponsor him in his quest to become a citizen. He was drafted into the US Army where he dutifully served from 1954-56 stationed in West Germany as a Medic. Mike started a successful career at Netherland Dairy as a Salesman which later became Crowley Foods. After the company relocated its headquarters to Binghamton, NY, Mike was fortunate enough to obtain a position with Niagara Mohawk where he retired in 1996 as a Meter Service Tech. After retirement, Mike and Mary enjoyed winters in Dunedin, Florida surrounded by family and friends for 24 years.

His true passion was Gaelic Football where he and his brothers all participated on the same Syracuse team over the years. He was particularly proud of being selected to the Midwest All-Star Gaelic football team which were US champions in 1956. Later years would be spent trying to revive interest in the sport in Syracuse where he was instrumental in organizing and coaching. Michael was also a proud member of the Ancient Order of Hibernians where he met the love of his life, Mary at one of their many dances.

He will be remembered as a devoted husband, father, grandfather and uncle who enjoyed attending all of his children and grandchildren’s lacrosse, soccer and hockey games in high school and college.

Michael is predeceased by his parents; and his older brother, Edward.

A Mass of Christian Burial will be celebrated immediately following. In lieu of flowers, please make contributions to Hospice Foundation of Central New York, 990 Seventh North Street, Liverpool, NY 13088.
To order memorial trees or send flowers to the family in memory of Michael Joseph Stack, please visit our flower store.