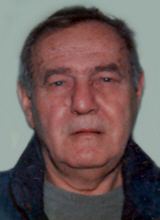 Michael Kudlick, 90, of Tipperary Hill, passed away Monday, January 17, 2011 at Iroquois Nursing Home. A lifetime resident of the Syracuse area, he was born Monday, October 11, 1920 and was the son of Andrew and Tekla Kudlick. He graduated from Vocational High School. Michael was an Army Air Corps veteran of World War II and served with the 61st Fighter Squadron. He retired in 1981 after more than 30 years with General Motors Corp. He enjoyed playing golf and collecting coins. Surviving are his sisters, Helen Kudlick of Syracuse and Sister M. Antonia of Stamford, Connecticut; and many nieces, nephews, great-nieces and great- nephews. Relatives and friends may call Thursday, January 20 from 11 a.m. to 12:15 p.m. at Buranich Funeral Home, 5431 W. Genesee St., Camillus. A Divine Liturgy for the Deceased will follow at 1 p.m. in St. John the Baptist Ukrainian Catholic Church. Michael will be laid to rest in St. John the Baptist Ukrainian Catholic Cemetery. In lieu of flowers, contributions may be made to the Missionary Sisters of Mother of God, c/o Sister Antonia, 111 West North St., Stamford, CT 60902.
To order memorial trees or send flowers to the family in memory of Michael Kudlick, please visit our flower store.