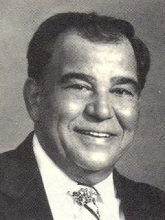 Michael V. Fabrizio, 78, of Howlett Hill, died peacefully on Sunday, December 28, 2008 at home, surrounded by his loving wife and children. Born in Syracuse on Wednesday, July 30, 1930, he was the son of Michael Joseph Fabrizio and Leona Harriet Morris Fabrizio. A lifetime resident of the Syracuse area, he was a Navy veteran, having served from 1955-1959. Michael was employed by the Town of Onondaga Highway Dept. for 18 years, retiring in 1997, and was formerly employed by Carrier Corp. He was a communicant of The Church of St. Michael & St. Peter for 50 years. A member of the Camillus Elks, he enjoyed hunting and fishing, and was an avid reader. Michael was predeceased by his parents, Michael and Leona; grandson, Mark Anthony Fabrizio; sister, Agnes Fosia; and brother, Fayes Fabrizio. Surviving are his wife of 56 years, the former Florence Bertollini; daughter, Denise Brady of Liverpool; sons and daughter-in-law, Michael J. and Karen Fabrizio of Skaneateles and Daniel C. Fabrizio of Elbridge; grandchildren, Jennifer (Nicholas) Scholz, John Brady and Rebecca and Michael Fabrizio; two great-grandchildren and several nieces, nephews and cousins. Services will be at 9:15 a.m. Friday, January 2, 2009 at the Buranich Funeral Home, 5431 W. Genesee St., Camillus and at 10 a.m. in The Church of St. Michael & St. Peter where a funeral Mass will be celebrated. Friends may call Thursday, January 1, 2009 from 3 to 6 p.m. at the funeral home. Burial will be in St. Francis Xavier Cemetery, Marcellus. In lieu of flowers, contributions may be made to Hospice of Central New York, 990 Seventh North St., Liverpool, NY 13088 or to the Howlett Hill Fire Dept., 3384 Howlett Hill Rd., Syracuse, NY 13215.
To order memorial trees or send flowers to the family in memory of Michael V. Fabrizio, please visit our flower store.