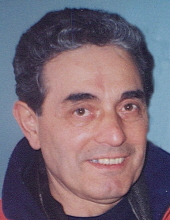 Peter J. LoFaro, 80, of Geddes, passed away Sunday, January 27, 2019 at The Centers at St. Camillus after a long battle with Alzheimer’s disease. Peter attended Vocational High School where he was the running back known as “Speedy Pete.” An Army veteran, he was a medical corpsman stationed in Germany. Peter worked as an agent for Metropolitan Life Insurance Co. before becoming a self-employed dry cleaner. He was an avid boxing fan and enjoyed riding his bicycle and exercising. Above all, Peter loved spending time with family and friends, especially his grandchildren.

Peter was predeceased by his parents, Anthony and Grace; brothers, Carmen and John; and recently his beloved son, John.

The family would like to thank the second floor staff at St. Camillus for their excellent care and compassion given to Peter.

A funeral Mass was celebrated in Holy Family Church.

In lieu of flowers, contributions may be made to the Alzheimer's Association of CNY, 441 W. Kirkpatrick St., Syracuse, NY 13204.
To order memorial trees or send flowers to the family in memory of Peter J. LoFaro, please visit our flower store.