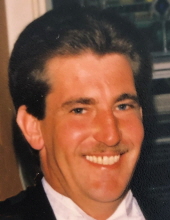 Raymond J. Churchill, 60, of Camillus, passed away unexpectedly on Tuesday. A lifetime resident of the Syracuse area, he was a 1979 graduate of Corcoran High School. Raymond was employed with Churchill Environmental for over 15 years. He was actively involved in his daughters’ softball teams and was a coach, umpire and VP of Softball at Geddes Little League. Raymond was a member of the Camillus Elks Club.

Raymond was predeceased by his parents, Robert and Rosemary; brother, Robert; and brother-in-law, Edwin Tifft.

Surviving are his wife of 29 years, the former Lori Karb; daughters, Kaleigh and Shannon Churchill, both of Camillus; sister, Karen Tifft of Camillus; brothers, Richard of North Carolina and Ronald of Syracuse; and several nieces, nephews and cousins.

Relatives and friends may call Monday, March 8 from 4 to 7 p.m. at the Buranich Funeral Home, 5431 W. Genesee St., Camillus. Face coverings are required.

In lieu of flowers, raise a toast in Ray’s memory.
To order memorial trees or send flowers to the family in memory of Raymond J. Churchill, please visit our flower store.