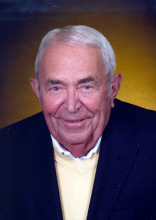 Raymond W. Buecheler, 86, of Sandy Pond, formerly of Camillus, passed away peacefully Friday, August 13, 2010 at his home, surrounded by his loving family. Born in Syracuse on Wednesday, June 25, 1924, he was the son of Daisy Mary Lee and Jacob Richard Buecheler. A lifetime resident of Syracuse, Ray spent summers on Sandy Pond and wintered in Bradenton, Florida. Ray was a Navy veteran of World War II and 1946 graduate of Hamilton College. He retired in 1987 after 28 years with Marsh & McLennan, Inc., and formerly was employed for 12 years with Bowen Perry & Forbes, Inc. He was a member of St. Michael's Lutheran Church and also a member of the University Club, The Syracuse Liederkranz and the Sandy Pond Sportsmen Club. Ray was predeceased by his beloved wife, the former Betsy Hosler, on January 18, 1996; brothers, Richard, in 2002 and John, in 2006. Surviving are his companion, Anita Richards of Bradenton, Florida; daughters and sons-in-law, Deborah and Jerry Finerghty of Westvale, Barbara and John Sharkey of Oswego and Elizabeth and Scott Petosa of Chittenango; seven grandchildren; and several nieces and nephews. Relatives and friends may call Wednesday, August 18 from 4 to 7 p.m. at the Buranich Funeral Home, 5431 W. Genesee St., Camillus. A memorial service will be held at 11 a.m. Thursday, August 19 in St. Michael’s Lutheran Church. In lieu of flowers, contributions may be made in Ray’s name to Friends of Oswego County Hospice, Inc., 34 E. Bridge St., Suite 202, P.O. Box 102, Oswego, NY 13126 or Hospice of Jefferson County, Inc., 425 Washington St., Watertown, NY 13601 or to one’s favorite charity.
To order memorial trees or send flowers to the family in memory of Raymond W. Buecheler, please visit our flower store.